Please note, this event has expired.

A musical based on the memoirs of Gypsy Rose Lee was a project of producer David Merrick and actress Ethel Merman. Merrick had read a chapter of Lee’s memoirs in Harper’s Magazine and approached Lee to obtain the rights

After an impressive “Overture” the show opens at a vaudeville theatre in Seattle. Both Baby June and Baby Louise are auditioning for a children’s variety act, and perform “Let Me Entertain You” to a far from appreciative crowd. A voice from offstage yells “Sing out, Louise!”, and Rose Hovick, the girl’s overbearing stage mother enters. It is clear that she is pushing the girls to succeed, and as she

After an impressive “Overture” the show opens at a vaudeville theatre in Seattle. Both Baby June and Baby Louise are auditioning for a children’s variety act, and perform “Let Me Entertain You” to a far from appreciative crowd. A voice from offstage yells “Sing out, Louise!”, and Rose Hovick, the girl’s overbearing stage mother enters. It is clear that she is pushing the girls to succeed, and as she doesn’t get the answer she wants, she drags them back home. She asks her father to lend her some money to create a newer, much bigger act that she hopes will tour the vaudeville circuit, (“Some People”). As her father refuses, suggesting her motives are not in the interest of the children, Rose storms out, taking his gold plaque off the way and hitchhikes with the girls to Los   Angeles.

In LA Rose meets Herbie, who she entices to represent the act and be their official manager. She flirts with him and dangles the prospect of a romantic engagement between them both, (“Small World”). Herbie works hard with the girls and creates a new act, getting boys into it and setting up “Baby June and Her Newsboys”. Whilst June is the focus of the act, Louise is left at the back and is a lot shyer than her sister. The act enjoys some success, but as time goes on vaudeville begins to wane and the girls get older, but the act stays the same. Life on the road is becoming tough, and Rose has the girls living in hotel rooms alongside the boys from the act. Herbie brings Mr Goldstone of the Orpheum Circuit to meet Rose, and she works hard to secure a contract with him, (“Have An Eggroll Mr Goldstone”). Louise is feeling forgotten, and sits alone on her birthday with her pet lamb (“Little Lamb”).

The act becomes “Dainty June and Her Farmboys” and they continue to tour. In a Chinese restaurant in New York, Rose and Herbie discuss their future. Whilst Herbie wants to marry Rose, she is more focussed on the act, and he threatens to some day leave them. Rose tells him “You’ll Never Get Away From Me” and they dance together. June is offered a contract with Mr Grantzinger, on the condition she goes to school, takes acting lessons and that Rose stays far away. Rose is furious and she storms out of the office refusing the contract. The girls despair at her behaviour and dream of a normal life, “If Momma Was Married”.

As the act continues to tour everyone’s spirits are down. The boys are growing older and Tulsa tells Louise how he hopes to form a dance team, and performs “All I Need Is The Girl”. Louise wishes she could be that girl, but finds a note from June telling her than she has run off with Tulsa and shares it with her mother. Rose is stunned and can’t believe that June has left her. Herbie tries to convince her to give it up and get married, but Rose refuses, telling them both that she will shift focus and make Louise the star instead, (“Everything’s Coming Up Roses”).

As the curtain rises on Act Two, we see little has changed. Rose is rehearsing “Madame Rose’s Toreadorables” which is a reworking of the old act, with Louise in place of June complete with blonde wig. After rehearsals don’t go so well Louise rips off the wig and tells her mother she isn’t her sister. Sensing the tension, Rose tries to reassure her and Herbie and they both sing “Together Wherever We Go”. Herbie manages to get the new act, which is now ‘Rose Louise and Her Hollywood Blondes’,  a two-week booking. When they arrive at the venue they quickly realise it is a burlesque house and Rose refuses to let Louise perform. Louise hits her mother with a reality check, telling her that they are broke and need to make money. She learns from the three broken-down strippers that she shares a dressing room with that “You Gotta Have a Gimmick” in order to succeed.

Rose finally agrees to marry Herbie after this contract is over. As they pack to leave the theatre manager announces that the star attractions has been arrested for soliciting. Rose’s natural response is “my daughter can do it”, not realising what she is signing Louise up to. As she begins to plan costumes and music for Louise’s new act, Herbie is disgusted and leaves her. Louise is terrified, but Rose forces her onto the stage. She begins a shy rendition of “Let Me Entertain You” which evolves into a full strip routine, as the audience watches her transform into the famous Gypsy Rose Lee.

Gypsy Rose Lee becomes a successful Burlesque star, and in her dressing room at Minsky’s in New   York, Rose realises that her daughter has grown up. She is angry that her daughter is now a star, independent of her and leaves slamming the door behind her. Alone on an empty stage Rose asks “why did I do it, what did it get me?” and performs the iconic “Rose’s Turn”. At the end of the number, Louise enters and tells her mother that she could have really been something. They reconcile, and as Rose begins to tell Louise about her new ‘dream’ the curtain falls. 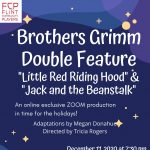 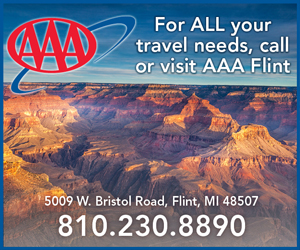 Genesee County Arts and Cultural Non-Profit Agencies are eligible to apply for grants. Deadline for applications is December 1, 2020. For more information and the online application, visit www.shareartgenesee.org

MADE POSSIBLE WITH SUPPORT FROM

This service is funded in part by the Genesee County Arts Education and Cultural Enrichment Millage funds. Your tax dollars are at work!