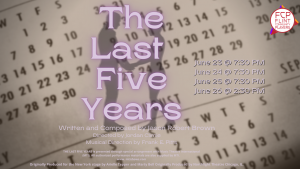 A musical about the five year relationship of two very different New Yorkers.

Call the box office at 810-441-9302 or visit our website at www.flintcommunityplayers.com to get your tickets today.

Cathy, a struggling actress, and Jamie, a budding novelist on the brink of wild success, are two New Yorkers who meet, fall in love, marry, and divorce over the span of five years. As the musical unfolds, the two tell the complete story of their relationship in an unorthodox way; Cathy moves backward in time to the beginning of the relationship as Jamie moves toward the end. Since its Off-Broadway premiere in 2002, Brown’s funny, poignant, and devastatingly honest two-person production has enraptured audiences around the world with its spellbinding and emotional score and libretto.

The Last Five Years is the first musical in the Flint Community Players Ghost Light Series! The show is rated for mature audiences for language and some suggestive content.