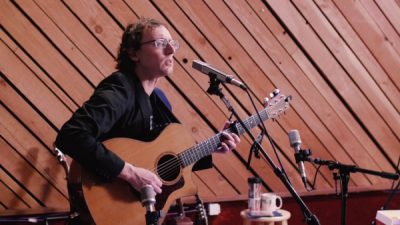 Flint. Mike Vial’s wife–writer Natalie Burg–said she wouldn’t marry him unless he quit his public school teaching job to pursue music. Five years later, Vial has played 1000+ gigs across the United States and Canada, and he’s released a new album. For his fourth music release, A World That’s Bigger, Vial recorded the entire folk album live and acoustic, similar to how Nick Drake made Pink Moon. “I was encouraged by Nick Drake’s story,” he said. “I aimed to capture the energy of my live performances on this record.” So in the spring of 2016, Vial took three acoustic guitars and recording gear to a cabin in northern Michigan. With the help of his friend Mike Gentry behind the mixing board, Vial completed a challenging, personal record. But it wasn’t easy. “Vial has an incredible amount of mental stamina and finger calluses,” producer Gentry said. “The guitar playing is intricate. It isn’t something every musician could do!” After recording 150 takes, Gentry and Vial picked the best ten; the album A World That’s Bigger was finished.