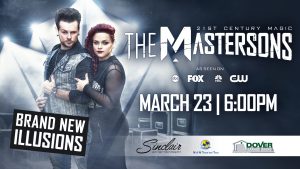 The amazing Mastersons will be in Flint, Michigan with mind bending Illusions.

for numerous celebrities, have been featured on ABC, FOX, NBC,

THE CW, and just recently performed for a studio audience of 1,000

during the filming of an A&E television special. With years of

everything you thought you knew, about a Magician & His Lovely

Assistant, and thrown it out the window.

Tickets are available at Ticketmaster or the Dort Event Center box office by phone or in person.

A great time for all ages with a meet and greet after the event.