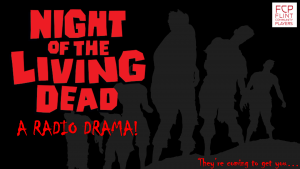 The classic zombie movie that pioneered the flesh eaters as we know them today comes to Flint Community Players this October!

“They’re coming to get you, Barbara!”

Flint Community Players is proud to present our first show of the 2020/2021 season. AN ONLINE EXCLUSIVE EVENT!

NIGHT OF THE LIVING DEAD: A RADIO DRAMA!

Original Film by George A. Romero

Based on the classic horror film by George Romaro and just in time for Halloween, the dead are rising, and they are coming for you! A ragtag group of Pennsylvanians barricade themselves in an old farmhouse to remain safe from a bloodthirsty, flesh-eating breed of monsters who are ravaging the East Coast of the United States. Night of the Living Dead, the classic zombie horror film that pioneered the flesh-eating monsters we know and love in media today, pits the dead against the living in a struggle for survival! As tensions rise, the dead slip through defenses, and hope dwindles these survivors will find that perhaps the alive are equally as feared as the dead! Join the actors of “FCP Radio” as they present this bone-chilling tale just in time for Halloween! You are a part of the show as the “live” radio studio audience as these talented actors perform Night of the Living Dead in the style of classic radio shows! Filled with the classic zombie story, intertwined with commercials for local businesses, and brought to life online for your entertainment, Night of the Living Dead is an experience like you’ve never seen at Flint Community Players!

NIGHT OF THE LIVING DEAD: A RADIO DRAMA will be presented to you via our social media platforms of Facebook and YouTube (while it is called a radio drama, please note this won’t actually be on the radio but is set up like a live-studio radio audience performance).

The performances are FREE, and if you feel so inclined, we will be accepting donations for the theatre on our website if you enjoy the performance and would like to support us further!

The production performance will be posted on social media platforms live for everyone to watch FRIDAY OCTOBER 30 @ 7:30 PM and also a special performance SATURDAY OCTOBER 31 @ 1:00 PM presented in Black & White just like the original spooky classic.

We hope you will enjoy this spooky tale this Halloween season!

Night of the Living Dead and FCP are sponsored by the Greater Flint Arts Council Share Art Genesee Grant Program and is made possible by the Genesee County Arts Education and Cultural Enrichment Millage Funds. Your tax dollars are at work!